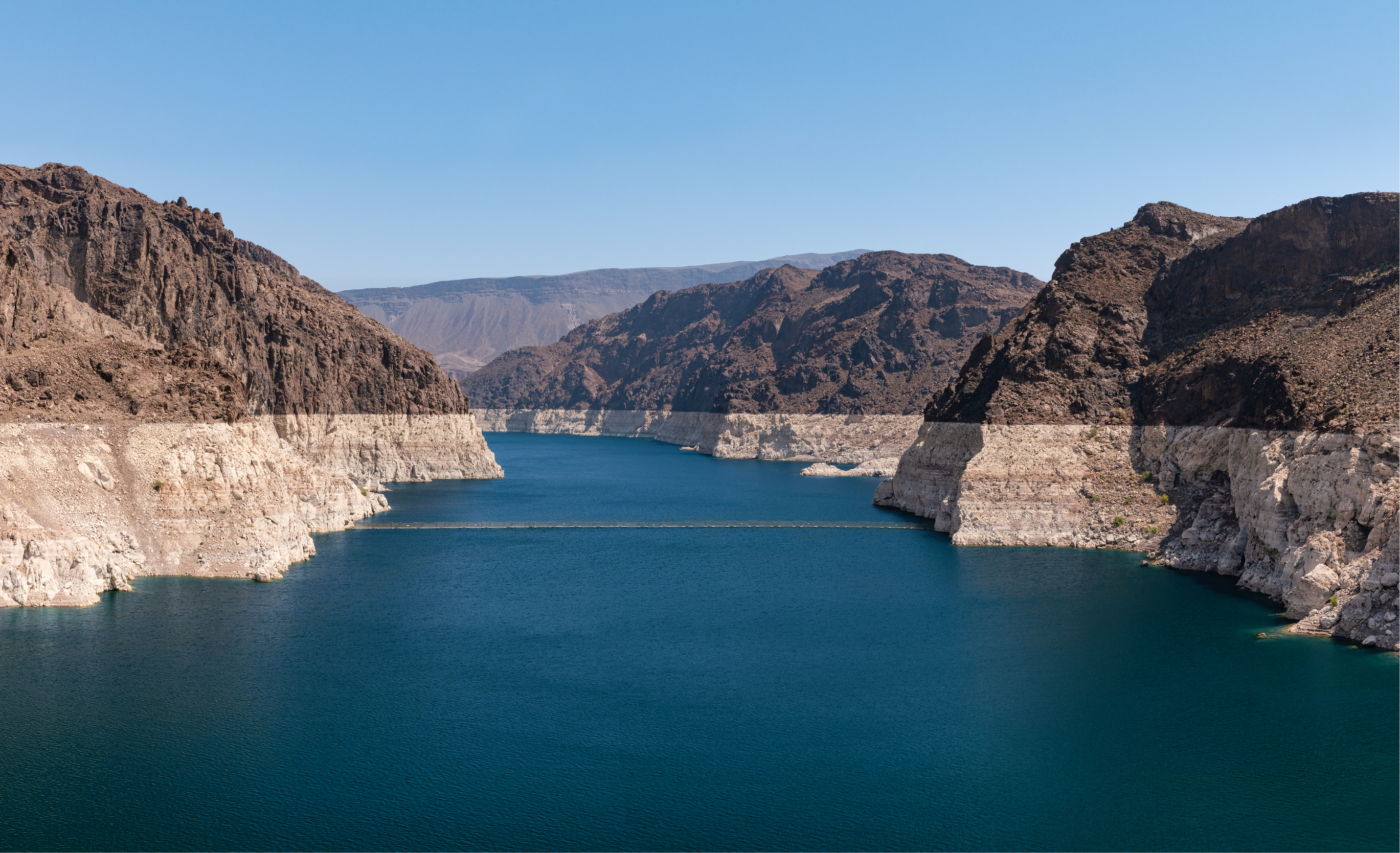 The Lake Mead Reservoir is exhibiting its now familiar white “bathtub ring” caused by the leaching of minerals on previously submerged surfaces. 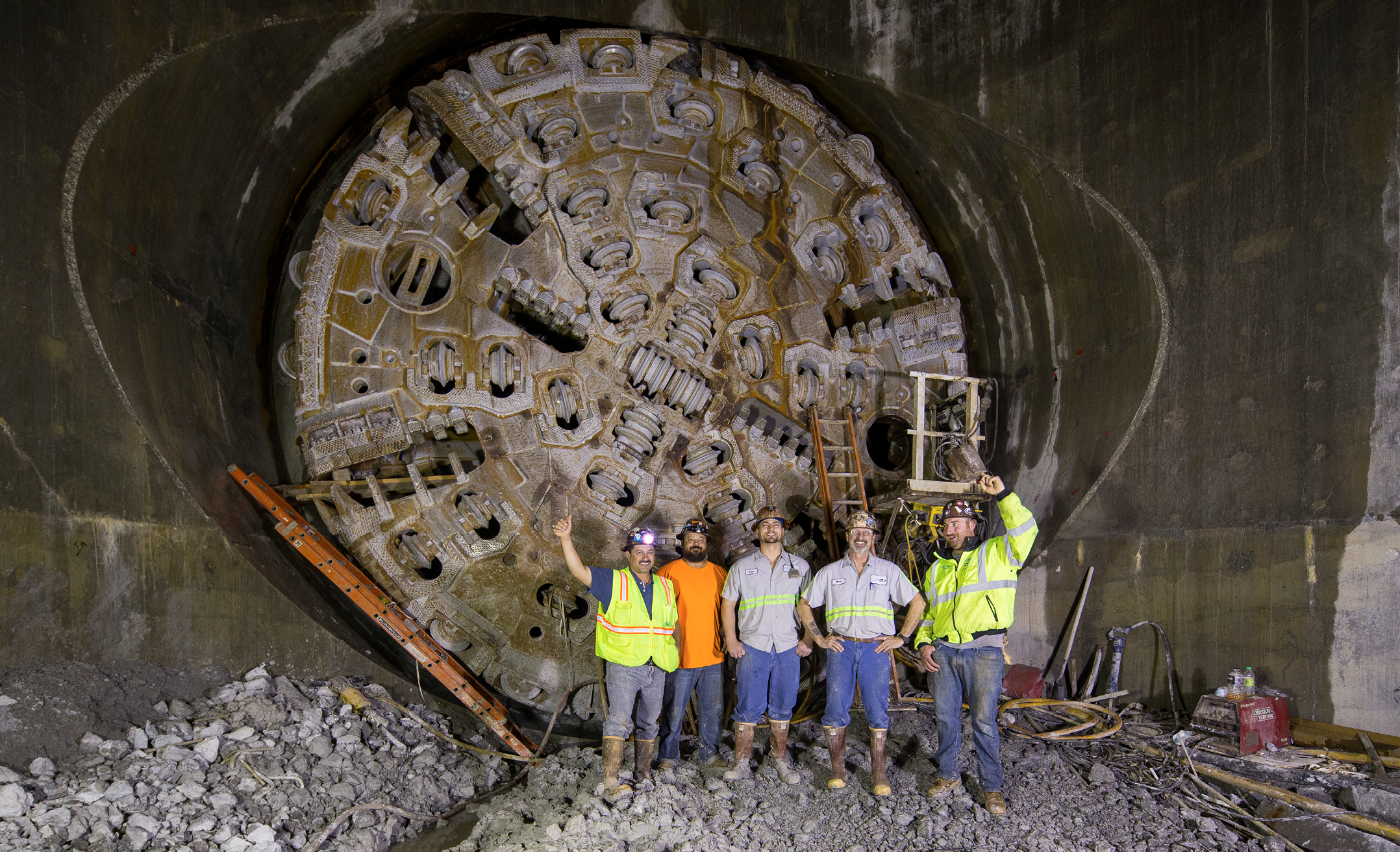 Construction workers stand in front of the massive boring machine head used to construct the third straw. This three mile, 24’ diameter tunnel provides water to the over two million residents of the Las Vegas Valley. 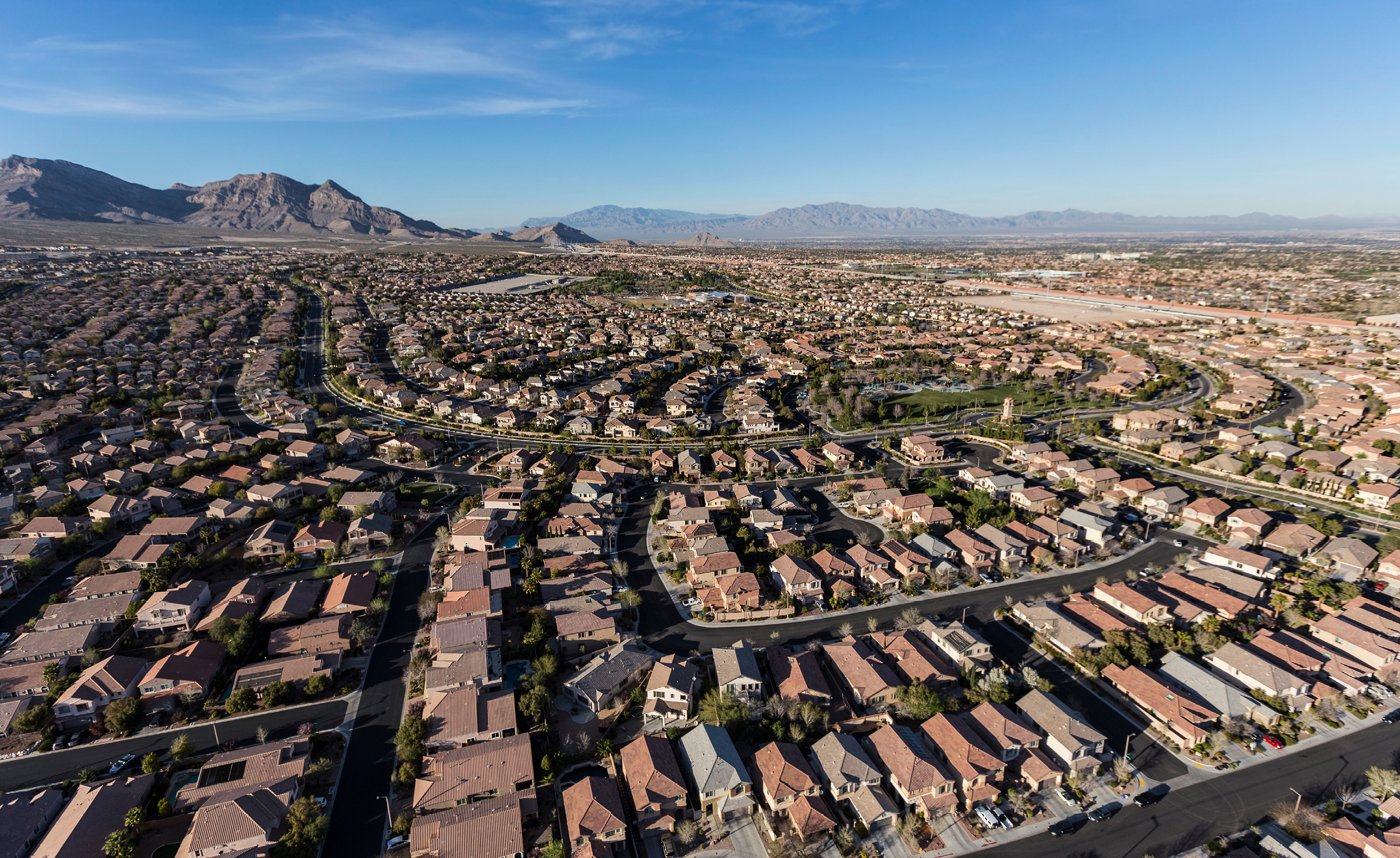 It’s easy to forget that, thanks to a sizeable aquifer beneath it, Las Vegas was once a water-abundant green oasis with lush meadows and springs. Paleontologists in the area have even found Las Vegas’ rock layers give evidence of a green and wet landscape that supported bison, camels, and ground sloth dating as far back as 500,000 years.

Flash forward to the last 200 years, human activity shifted from settlers passing through town for a water respite in the 1800s to more of us taking up permanent residence in a place becoming less green and wet, and more unsustainable for human survival. But even more recently, we convinced ourselves there was still plenty of water. In the 1950s, our population of roughly 40,000 feasted on 40,000 acre-feet annually of water supplied by that aquifer, about eight times the amount needed at the time. We dug hundreds of wells and sipped away at our water bounty.

Today, the facts are quite different. The aquifer ran dry in 1962, and we now receive 90% of our water from Lake Mead’s annual (and shrinking) Colorado River collection, an allotment of 300,000 acre-feet, to sustain 2.7 million people. The lake is drying up, and its condition will not improve. To sustain, a change in behavior is required. And the question still looms: Can we all do enough to keep the water flowing? And just how much time do we really have with the precious water resources of today?

Starting with the basics

Southern Nevada suffers from what is scientifically referred to as an anthropogenic drought, the trifecta of climate change, inherent water variability in the region, and the influence of human activity. In layman speak: there are a lot of us who live in a place whose best hydrological days are behind it, yet we dare to farm and consume water resources with our fingers crossed.

There’s a misconception for many that the low lake levels will somehow reverse if we just have a few good years of rain and snowpack. Except, as noted by Dan McEvoy, climatologist and assistant research professor at the Desert Research Institute (DRI), this past year the Colorado basin snowpack was average. Even with the result of an average year, the lakes (Powell and Mead) still saw less than 50% of the average run-off. You might need about a decade of wet years to even make a dent.

“Lake Mead will not rebound with a really wet year,” McEvoy assures. “This is a long-term trend, since about 2000. Within that 20-year period, there have been some wet years. The lake gets a little bump, but it’s been on a long-term decline that’s not likely to improve.”

That reality has led us to a federally-declared water shortage for 2022. With that, the state must reduce annual usage by 7%, or 21,000 acre-feet, next year. Nevada’s 300,000 acre-feet per year Colorado River allotment is now 279,000. So, why no panic? It was something state climate experts saw coming, and thanks to conservation and other efforts, the region only used about 256,000 acre-feet in 2020 anyway.

Climate change and a messaging conundrum

Climate change is evident in shifting weather patterns, wildfires, drought, and an unpredictable snowpack year in and year out. That means, in addition to being smarter with water resources, tackling climate change is still required on individual and group levels. While preserving water resources is one piece of the puzzle, all of those daily decisions around burning fewer fossil fuels, recycling, reusing, re-purposing, and not wasting resources still matter.

But they are measures that live alongside a need to avoid panic messaging around the subject, too. John Entsminger, general manager of the Southern Nevada Water Authority (SNWA), is in a catch-22. For 20 years, his teams have shaped a narrative balancing the need for conservation with partnerships and infrastructure improvement announcements that assure us the water will keep flowing.

“Messaging around this topic is always fairly difficult…In some ways we’re victims of our own success,” he says. “We’ve built [large] capital facilities and then we bury them behind block walls…Our water bills are relatively inexpensive and average about $50 a month, considerably cheaper than our cell phone bills…In some ways we take for granted what goes into providing a water supply.”

With conservation, the SNWA has clearly shined. Since 2002, Southern Nevada has added 800,000 residents, but reduced gallons per capita per day (GPCD) usage from 211 to 112. Incentives to remove turf and legislation like AB356, which prohibits non-functional turf irrigation, have helped, too. And on the infrastructures side, the big accomplishment in the past decade was the installation of a third intake at Lake Mead. Design began in 2007, the $1.5 billion project was completed in 2015. The move allows the authority to pump from areas of the lake well below the current 1,068-foot level and “even in the most dire of hydrologic conditions,” Entsminger says.

The SNWA also has a 50-year resource plan that projects population growth, water demand, and supply levels out for five decades. It is revisited and updated every year and expects Southern Nevada’s population to be 4 million in 2071. Entsminger adds that even with continued declines in water levels, the agency has the tools to meet demand, but not without “substantial community investment and no small amount of political will.”

Part of the reason for the authority’s confidence to meet the water demands of a growing population comes from water efficiency technology developments, conservation, and partnerships that can help improve matters on the supply side.

For example, the SNWA is working with the Metro Water District of Southern California to potentially fund a multi-billion-dollar regional water recycling facility that would divert wastewater normally discharged into the Pacific Ocean and inject it into aquifers along a Southern California water distribution network for reuse. In exchange for SNWA’s investment, a certain number of acre-feet of the Southern California utility’s Colorado River allotment would go to Nevada.

System efficiency technologies are evolving as well. WaterStart, a nonprofit collection of Nevada water agencies and large consumers, was created in 2013 to accelerate adoption of new water technologies. It has been involved in about 40 different pilot tests since it was created; eight are underway right now, says Executive Director Nathan Allen.

“When we talk about what we do, we often say…‘anything that leads to more water, safer water, and cheaper water, that’s what we want to help deploy,’” Allen explains.

The “safer” part of that explanation is shown in a current pilot with Israel-based Sensoil Innovations. The pilot uses the company’s sensors to monitor an aging levy system in the Sacramento River delta. If one of the levies broke, it could damage the ability to bring water to 19 million people in Southern California. In that case, utilities would need to rely on more water from Lake Mead, Allen says.

Another WaterStart pilot involves a technology that allows the SNWA to create a “digital twin” of its infrastructure to shorten the time window to find data for inefficiencies and maintenance issues in the system that could lead to resource losses. WaterStart is also involved with collaborations on infrastructure monitoring technologies in the UK and Australia that, if proven, could find their way to Southern Nevada.

Even with agencies clearly trying to do the right thing, there are skeptics who have a hard time seeing beyond Lake Mead’s unappetizing toilet bowl ring. One is Chris Fraley, the chief investment officer for RealtyMogul, an online real estate investment crowdsourcing platform — with a $3.5 billion portfolio. He helps investors find income-producing real estate assets, and as part of his due diligence strategy, he evaluates a property’s potential future risks.

Today, his cautious eye has turned to the desert southwest, specifically cities affected by the 20-year drought. Recently, RealtyMogul indicated its investors were shying away from long-term property holds—10 or more years—in markets like Phoenix, Las Vegas, Tucson and certain Southern California cities, for fear of rising water prices.

“With respect to water, if things go on the current trajectory, it’s hard to imagine water costs not completely skyrocketing over the relatively near term,” he says. “We’re not saying ‘never’ (on investment opportunities), we’re just being very cautious and trying to make sure we understand the risks associated with the transaction.”

When Entsminger and McAvoy were told of Fraley’s position, both were surprised. While there’s ample argument for saying the move is probably a little extreme today, it does beg the inevitable question of when such a move might actually be considered prudent? 50 years? 100? 200 years? That’s a question no one really seems to know how to answer.